CUNY Journalism Press, the academic imprint of the City University of New York’s Graduate School of Journalism, will publish The Illustrated Courtroom: 50 Years of Court Art in early 2014. 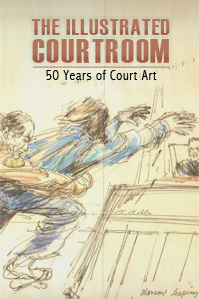 nique blend of art and news in courtroom illustrations, the book will offer some of the best work of five award-winning illustrators covering a range of the biggest courtroom dramas of the last half-century. The book is edited by highly regarded courtroom illustrator Elizabeth Williams, who has covered many headline-grabbing trials (Martha Stewart, John Gotti, John DeLorean, Bernard Madoff) for the Associated Press, every major network and many other news organizations. Narrative will be supplied by crime journalist and author Sue Russell, whose work includes “Lethal Intent,” the acclaimed biography of executed serial killer Aileen Wuornos.

The Illustrated Courtroom will include about 150 iconic illustrations depicting memorable moments, and will tell the stories behind the headlines, with the artists’ insider insights. The result will be an artists’ eye view of courtroom history in the making, allowing readers to savor the extraordinary work of those who go where cameras cannot.

The book will be a must-have for everyone passionate about true crime, legendary defendants, headline-making trials, big-time lawyers and courtroom drama.